You are here: Home > New York City For Teens 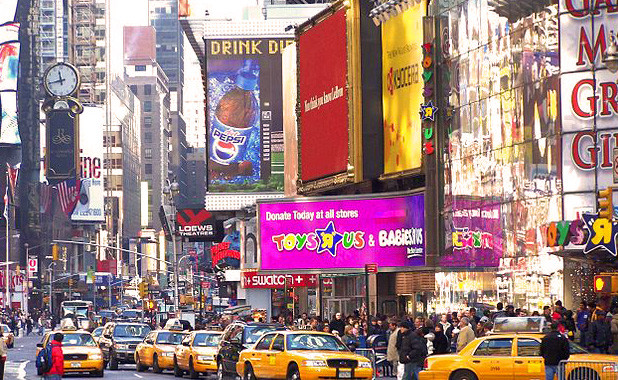 New York City offers a virtual treasure chest of fun things to do for teenagers. This age group is generally the most difficult to please and appease while vacationing. They are too old for the kid stuff and too young to appreciate some of the more ‘grown up’ entertainment and of course, they don’t want to look like they’re having too much fun. From amusement parks to cyber cafes, from bookstores to malls and video arcades, to sporting events and sporting complexes New York City is a city that was almost made for teens to enjoy.

The trick to enjoying your New York City vacation while ensuring that your teen enjoys his or her time in the city is compromise. Agree to go watch the skateboarding in the park if he or she will suffer through a museum with you. You just might find that you each find something to enjoy about the other’s activities. There are so many wonderful things to do and see in New York. You don’t have to pay a lot of money in order to have a good time as many of these wonderful events are offered free or for very little cost. You can also purchase passes that allow free entrance to certain city attractions for one low fee. You will find that of the freebie offerings there is usually something that will appeal to various members of your family including your teens.

Compromise is a good idea on any vacation with friends or family and it teaches your teens an important lesson-their opinion matters to you. They also learn to compromise, to share time and experiences, and to think critically. They are forced to weight all the things they would like to do and select the things that matter most to them to do. This is a very good thing for people to learn as early as possible and will be an invaluable lesson, as they grow older and eventually begin making their own decisions in life as well. I even try to offer the younger children a voice in what’s going on. I offer age appropriate choices and allow them to select the one that matters most to them.

Teens are often very hard to please or predict and their wants can change between the time it takes to open a pack of pop tarts and the time it takes to actually drop them in the toaster. Be aware of this when making plans with teens and go with the flow. You do not have to let your teen rule your vacation but by allowing him or her a voice in the decision making process you might all learn some important and interesting things about each other.

Girl teens are often easily distracted by shopping-while New York City has some of the trendiest boutiques you may want to see if you can talk her into some of them any consignment or secondhand stores that abound. You can call it ‘vintage clothing’ if you must in order to get her in the doors but you can score some awesome deals on clothes that look barely worn if that and she’ll have some nice additions to her wardrobe for a fraction of their costs if new. There are also some wonderful outlet malls in NYC as well. The trick with shopping any of these stores is to know the prices of things. Some things are excellent bargains while others are not so much.

Teen boys will have a grand time at places such as Game Time Nation where they can play video games for endless hours. You can even try playing games together if you’re brave enough. Fair warning offered here, teens are brutal in their victories and you will never live down your failures in the video game arena with them so study up before hand.

The most important thing to remember about vacationing with your teen is that you’d like them to have some fond memories of your time together, even during their teen years. Take care that you are including them in your plans rather than making their plans for them. It is time they are let into the decision making process to some degree even if it’s allowing either or options or asking them to list a few things they’d like to do and you selecting from those. If you’re having fun it is quite likely that they will eventually join in.