The Statue Of Liberty

You are here: Home > The Statue Of Liberty 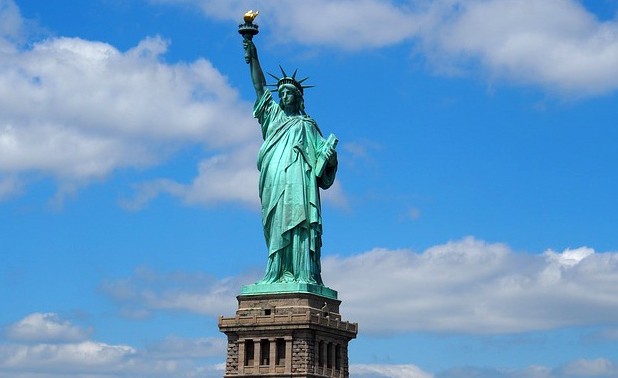 The Statue of Liberty is located on Liberty Island, New York, at the mouth of the Hudson River. The statue was dedicated on October 28, 1886 to commemorate the centennial anniversary of the signing of the Declaration of Independence and as a gesture of friendship between the United States and France. At 350 feet, 1 inch tall from the ground to the flame, the Statue of Liberty is approximately the size of a 22 story building. In 1886, the statue was the tallest structure in New York City. Lady Liberty is made of pure copper (3/32 of an inch thick-about the thickness of two pennies put together) except for the flame on her torch, which is coated in gold leaf. Originally, the statue was copper in color, but has turned green from natural oxidation. The greenness is actually called a patina coating and protects the copper.

The statue faces southeast, which is a prime position for greeting ships as they enter the harbor. It used to be possible to climb to the torch, but it has been closed since the “Black Tom” explosion of July 30, 1916. Visitors were able to ascend to the crown of the statue until the terrorist attacks of September 11, 2001. Since then, the crown has been closed and the National Park Service has no immediate plans to reopen it.

“Liberty Enlightening the World” is the Statue of Liberty’s proper title. She was sculpted by Frederic Aguste Bartholdi and the internal structure was engineered by Alexandre Gustave Eiffel of Eiffel Tower fame. Because the statue is so enormous, she had to be transported to the United States aboard the French warship Isère in 350 pieces. The statue arrived in New York on June 17, 1885, but stayed in crates for 11 months until the pedestal could be finished. Emma Lazarus’s famous “Statue of Liberty Poem”, “The New Colossus” was read at the dedication and later inscribed on a plaque. From the time of her dedication in 1886 until 1902, the Statue of Liberty was a functional lighthouse.

The statue itself is symbolic of freedom, but certain aspects of Lady Liberty are specific symbols. The seven points on her crown represent the seven seas and the seven continents. She holds a flaming torch in her right hand, a symbol of enlightenment. The stone tablet she bears in her left hand is inscribed with the date, July IV, MDCCLXXVI, or July 4, 1776. Her face is said to be modeled after Bartholdi’s mother.

In 1983, American Express made the Statue of Liberty a beneficiary of one of the earliest cause marketing campaigns. For every purchase made with American Express, the company donated one cent to for the restoration of the statue. All together, the drive raised over $1.7 million dollars. The following year, the statue was closed so that a $62 million restoration project could be completed before her centennial celebration.

The Statue of Liberty is an important and cherished part of American history. Lady Liberty stands as a beacon of freedom to millions of people around the world.