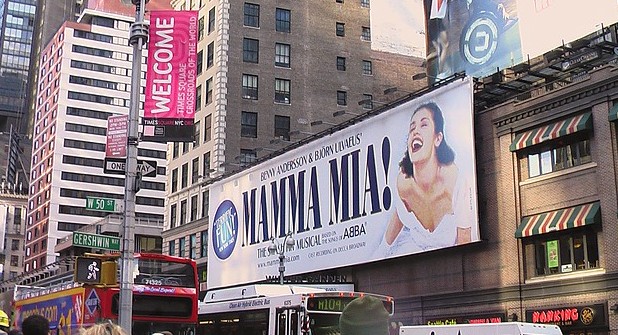 As you walk further up Broadway, you’ll spot one of the world’s most celebrated buildings – The Woolworth Building, located at 233 Broadway. The Building was commissioned by the wealthy merchant, Franklin Woolworth, founder of the F. W. Woolworth Company. Franklin Woolworth pioneered the concept of discount stores and got wealthy enough to pay over thirteen million dollars in cash for the building that bears his name. The Woolworth Building opened in 1913 and is a National Historic Landmark.

A short ten minute walk north will bring you to the famous Times Square – one of the most recognizable areas in the world. Your heart will skip a beat as you stand there at the intersection of Broadway and Seventh Avenue. Not only is this the famous theatre district, but you will be dazzled by the hustle and bustle of people, taxis, and so much to see and do. So, stand there a moment and take it all in.

If you are into people watching, this is the place to be. Sit down at a restaurant table, and watch all the interesting people walk by as you eat a nice meal. A famous place you might want to try out is The Rainbow Room, located just north of Times Square at Rockefeller Center. If you’re in the mood for something sweet, Lindy’s deli is known to have some awesome New York style cheesecake.

If you get to Times Square early enough in the morning, you can stand outside the NBC Studios and wave to your family and friends as they tape their morning program. The younger crowd may enjoy a visit to the MTV studio, also located in this area.

A lot of people come to Times Square to see a theatre show and this is where you buy tickets. Savvy theatre goers with extra time on their hands can be found at the TKTS (Tee-Kay Tee-Ess) booth waiting in line for discount theatre tickets. There are two locations in the city. The Broadway booth is located at 45th and 47th streets. While there’s no guarantee of getting a ticket, you can buy tickets here for 25-50% off regular price.

After visiting shops for souvenirs, you might just pass by the Naked Cowboy (he performs in his underwear) strumming on his red, white and blue guitar and singing one of his original songs. Street performing or busking, is a long tradition in New York City. It certainly adds to the colorful atmosphere.

Continuting on your walking tour, you will reach Columbus Circle, which intersects Broadway, Central Park West and Central Park South. This is the first traffic circle ever built in the U.S. If you are a music and ballet lover, you’ll want to see the Lincoln Center, home to the Joffrey and American Ballet troupes, and hosts to many orchestras and special cultural events.

Exploring Broadway Avenue will definitely be a rich experience during your visit to New York City. You will see first-hand why Broadway is celebrated around the world as a hub of entertainment and excitement.