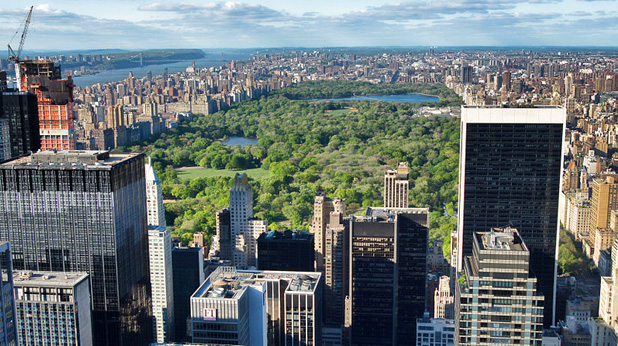 New York City’s Central Park is a vibrant, colorful attraction for tourists and locals alike. The park occupies over 840 acres in Manhattan and receives over 25 million visitors annually. It is bordered to the north by West 110th Street, to the west by Central Park West, to the south by West 59th Street, and to the east by the famous 5th Avenue. Though it appears natural, Central Park, designed by Frederick Law Olmstead and Calvert Vaux, is entirely landscaped with artificial lakes, a zoo, playgrounds, walking trails, and ice skating rinks.

In the mid-nineteenth century, New York City was growing at an unprecedented rate. Public open spaces, aside from cemeteries, were few and far between. Poet William Cullen Bryant, among others, began to voice a need for a larger, sanctioned public park. In 1953, New York Legislature designated over 700 acres of land to be used for a park, for a cost of about 5 million dollars. A design contest was held, and Olmstead and Vaux’s “Greensward Plan” was chosen. However, after the park’s construction, public interest waivered and the park declined quickly after it was built; the political powers in New York City at the time were not interested in maintaining a 700 acre public facility.

In 1934, mayor Fiorello LaGuardia appointed Robert Morris to restore and revitalize Central park. The park underwent major construction and redesigning; athletic fields were constructed and the walking trails were adjusted for automobiles. In the 1960s, the park thrived as a symbol for counter-culture events and urban revival. Many rock concerts, political events, and Shakespearean plays took place in Central Park. In 1963, it was declared a national historic landmark. Unfortunately, due to budget cuts in the 1970s, the park suffered another rapid decline. It was restored again in the 1980s and early 1990s, and remains a lively entertainment mecca today.

Central Park’s place in pop culture is secure. Legendary folk singers Paul Simon and Art Garfunkel played a reunion concert at Central Park, and subsequently released a recording of it that went on to be one of their best-selling albums. In recent years, the Park has hosted a variety of music festivals, including the extremely popular Dave Matthews Band. It was featured in the James Bond film Live and Let Die, as well as Madagascar. J.D. Salinger’s coming-of-age novel is partially set in Central Park, while Edward Albee’s drama The Zoo Story is completely set in Central Park; there is even a playground named after Diana Ross. Perhaps the most culturally significant pop culture aspect of Central Park is Strawberry Fields.