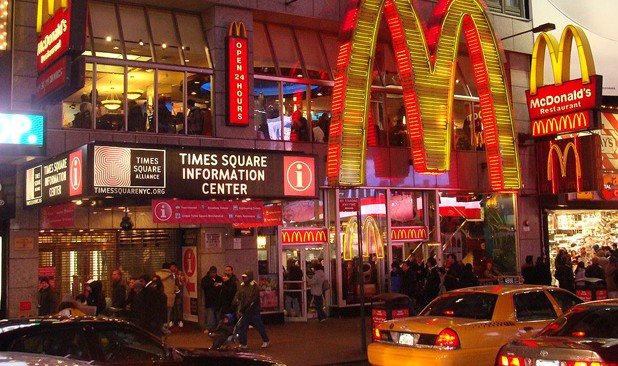 Times Square, one of New York City’s premier tourist destinations, is located on a major intersection in Midtown Manhattan–at the junction of Broadway and 27th Street and from West 42nd Street to West 47th Street. It occupies the blocks between 6th and 8th Avenues from east to west, and West 40th and West 53rd Streets from north to south. Times Square was “christened” in 1904; not coincidentally, so were neon lights and the city’s first subway line. New Yorkers wasted no time in starting the Times Square New Year’s Eve celebration tradition: they began ringing in the new year at Times Square in 1904 as well.

Previously, the area that has been called “Times Square” for over 100 years was known as The Longacre. On April 8, 1904, the name was changed to Times Square to commemorate the official opening of the brand new New York Times Building located on the triangle of land at the intersection of Broadway, 42nd Street, and 7th Avenue. The building was the tallest in Manhattan at the time. In 1913, the New York Times moved to a larger facility across Broadway and the New York Times Building was renamed the Allied Chemical Building. Today, it is known simply as One Times Square.

In the 1980s and early 1990s, city and state officials began serious efforts to reverse the decline of Times Square. Today, Times Square has been restored to its former glory and boasts over 27,000 residents and over 26 million visitors each year, and makes a serious contribution to New York City’s economy